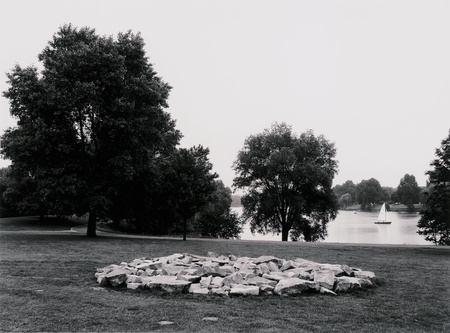 Meadows on the northern side of Aasee lake, east of Kardinal-von-Galen-Ring.

Temporary installation for the duration of Skulptur Ausstellung in Münster 1977. Removed six months after the exhibition

lives and works in Bristol

Given the relentless changes in technology and society, people like to view nature and the past with a romanticising gaze. Richard Long’s works explore this quest for primordial origins. In 1977 the British Land Art artist constructed a circle of roughly hewn stones on a meadow near Münster’s Aasee lake. The structure made of Westphalian sandstone merged into the surrounding parkland like a prehistoric monument.

Long frequently works with natural materials such as stone and wood. At indoor and outdoor locations he arranges them in meticulously selected places into lines, spirals or circles. In the course of his long walks and hikes in the open country Long looks for sites for his art. He then photographs the spatial effect of these formations in their natural setting. These records are sometimes the only remaining evidence of the sculptures and their locations.

By contrast, Stone Cairn was easy to find for all visitors to Münster during the Skulptur Ausstellung in Münster 1977. The act of walking as a meaningful activity was undertaken by those who were interested as they made their way through the parkland around Aasee lake to see Long’s work. His piece could be experienced both from afar and near in a mixture of walking and looking. 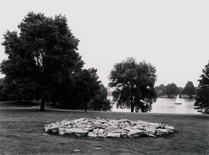