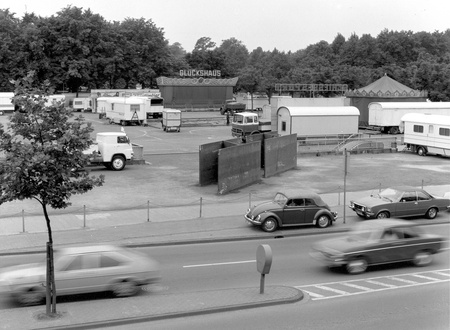 Schlossplatz (until 2012 known as Hindenburgplatz)

For his contribution to the project section of Skulptur Ausstellung in Münster 1977 the US American artist chose a site on the former Hindenburgplatz (now called Schlossplatz) next to the entrance to the pedestrian underpass, at that time still in use, and opposite the H1 lecture hall building of Münster University. Set diagonally to the road, he placed two identical bodies made of 6-cm thick Corten steel sheets parallel to each other, leant against each other in the shape of an H. With this steel plate arrangement constructed “in the manner of a house of cards Serra dissolved the ostensible contradiction between monumentality and mobility.”1

At first sight viewers experienced the sculpture as a seemingly two-dimensional object made up of surfaces and lines. But when one got closer and walked through it, the structure revealed its three-dimensionality. It was precisely this kind of perceptual process that interested Serra in this work. In a statement reproduced in the catalogue he wrote, “There are no established patterns or expectations of audience awareness. The observed fact and experience of the work is not the preconceived idea of its construction.”2

Indeed, in the course of the locally much criticised exhibition the work was gradually ‘re-purposed’ and covered with graffiti that designated one toilet for women and one for men. 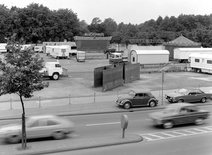