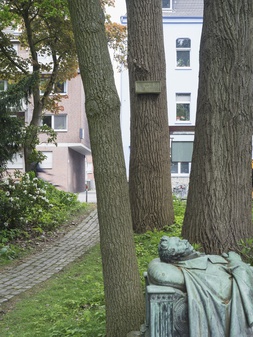 A Remembrance of Annette

In 1987 Ian Hamilton Finlay attached a plaque in memory of the Westphalian poet Annette von Droste-Hülshoff (1797–1848) at a height of four meters to the trunk of an old poplar tree. The sandstone panel is located above the Droste family grave in the former Überwasser cemetery, which since 1926 has been part of the grounds of the park. Finlay quotes the author, composer and poet on the engraved sandstone panel: “Meine Lieder werden leben, wenn ich längst entschwand” [My songs will live, long after I have disappeared]. The quote originates from the seventh verse of the poem Am fünften Sonntag in der Fasten [On the Fifth Sunday in Lent]:

My songs will live,
long after I have disappeared.
Many a one will tremble before them
who has felt as I do,
whether another has offered them,
or my own hand.
Behold, the songs were allowed to live,
but I disappeared.1

The stone with its inscription in Roman typeface is positioned on the tree so as to cantilever over the other graves. Whilst merging with its surroundings, it nevertheless remains somewhat distanced; indeed the tree which is still growing conveys the panel ever higher. Finlay too was a poet, known in the 1960s as a representative of concrete poetry, which he ultimately developed into one-word poems that were attached to trees, columns and panels on the ground. In Little Sparta, a two hectare garden near Edinburgh, he assembled 275 of his own works of art. Virtually incomprehensible in isolation, they require their surroundings as a point of reference and are thus determined by their site-specific nature. Using quotations from literature and philosophy, he created a striking interplay between literary sources and the natural environment. The gravestones of the Überwasser cemetery in Münster have long since been overgrown by vegetation. “The poet has become a gardener”, is how Lucius Burckhardt, the founder of promenadology, described Finlay’s work in 1987. “To make an environment into a landscape does not require external intervention, but the awakening of understanding in our perception. Finlay is therefore a gardener that does not garden, but instead interprets the existing in the manner of gardening.”2