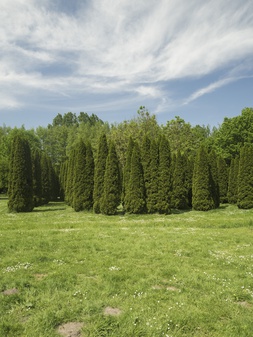 * 1943 in Görlitz, Germany
lives and works in Los Angeles, USA, and in the cities of the works

Earth and plants, light and air are the components of Maria Nordman’s continually changing work De Civitate1 in Wienburg Park. The sculpture is based on geometric forms: a double row of 100 dawn redwoods, Metasequoia glyptostroboides, form a U-shape open to the north. A second U-shape, also consisting of Metasequoia, opens to the south. In a third area North European Thuja, Thuja occidentales, are precisely arranged in differing geometric forms. The various elements are predominantly densely planted, growing into walls, accessible chambers, and light-flooded spaces.

In addition to the precise composition of the layout, the organic aspect of growth, random, natural development, and the dynamic interplay between the sculpture’s individual elements is of great importance to the work. Nordman has expanded her concept of sculpture to include the dimension of time: the growth of the trees and the changing seasons making transformation both a conscious and continuous experience.

The original species2 of three ancient trees are characterized by an unusually long life expectancy. Due to their coevolution, they are exemplary representatives of the flora from the three continents of Asia, America, and Europe. Within this microcosm of globalisation, the distance between different cultures and ecosystems has dissolved. The Wienburg Park serves not only as artistic material but also as an enclosure for the sculpture which, while blending into the park, at the same time distinguishes itself through the choice of plants and their artificial arrangement. Within the context of Land Art, Nordman explores ideas and definitions of inside and outside, nature and culture.

Already in 1987 Nordman proposed a landart work as her contribution for Skulptur Projekte in Münster. However, this project intended to be installed at a meadow near Kanalstraße remained unrealised.3 Nordman’s piece still visible today and entitled De Civitate – which may be translated as “About the City” or “About Citizenship” – was not realised as part of Skulptur Projekte but by the city of Münster and with the support of a private sponsor as well as with funding of the citizens of Münster.

2 The first U-form was originally planted with Ginkgo biloba. Due to the marshy state of the ground, which was too damp for the gingko trees, which are members of the fern family, they were replaced by dawn redwoods in 2007.