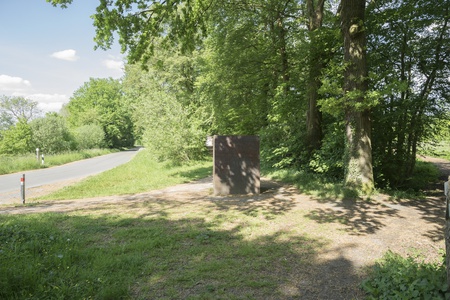 Richard Serra’s Dialogue with Johann Conrad Schlaun takes the form of a solid forged steel cuboid, weighing 40 tons. It is located in the middle of the avenue going towards Rüschhaus, the former country house of the Westphalian Baroque master builder Johann Conrad Schlaun (1695–1773). The dimensions of the sculpture correspond to those of the main gate building, located at the other end of the driveway. The door of the latter is likewise two metres high and 1.5 metres wide. Inclining towards Rüschhaus, the sculpture enters into a dialogue with the building across a distance of approximately 270 metres.
The sculpture is located somewhat away from the tourist activities around the baroque ensemble, which is today accessed from the side, nevertheless the sculpture remains visible to visitors. In the original architectural concept however the avenue played a central role as a prestigious driveway. Schlaun even secured it with barriers, causing offence to neighbouring farmers upon whose right of way he was infringing.

Serra’s sculpture occupies the very spot from which the entire architecture of the estate, conceived symmetrically on an axis and staggered in a stage-like manner, unfolds.1 In advance of the project the artist formulated the potential of site-specific works in transforming the context of their location, as follows: “[They] restructure their surroundings, both in their conception as well as in terms of how they are perceived.”2 This was a continuation of Serra’s intensive involvement with Schlaun’s buildings in Münster. For example for the project area of the Skulptur Ausstellung in Münster 1977 he contrasted the symmetry of the palace estate with a diagonally placed steel plate at Hindenburgplatz. For the Skulptur Projekte in Münster 1987 he used the work Trunk – Johann Conrad Schlaun Recomposed at Erbdrostenhof to demonstrate, in an extremely reduced manner, the architectural principles of the building’s façade. Both works however have not remained in their original location. On the occasion of the 300th anniversary of the master builder's birthday and at the invitation of the Münster Lions-Club, Serra in Dialogue with Johann Conrad Schlaun was able to create a permanent location to experience the work. 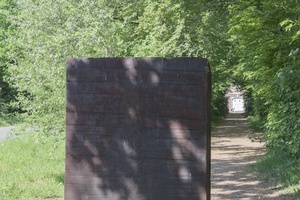