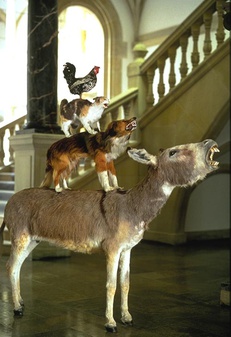 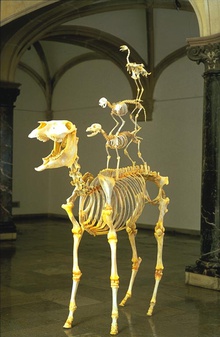 Historic section of the Westfälisches Landesmuseum für Kunst und Kulturgeschichte. Temporary installation for the duration of Skulptur. Projekte in Münster 1997

City of Bremen, since 2002 on loan to the Kunsthalle Bremen

Historic section of the Westfälisches Landesmuseum für Kunst und Kulturgeschichte. Temporary installation for the duration of Skulptur. Projekte in Münster 1997

City of Bremen, since 2002 on loan to the Kunsthalle Bremen

Out of the Blue

Aasee lake, beneath the Goldene Brücke
Temporary installation for the duration of Skulptur. Projekte in Münster 1997

21 stories by Francesco Bonami based on an idea of Maurizio Cattelan, illustrated by Edda Köchl

Featured in the exhibition catalogue for Skulptur. Projekte in Münster 1997

lives and works in New York, USA, and Milan, Italy

Maurizio Cattelan’s contribution to Skulptur. Projekte in Münster 1997 consisted of four works that explored the theme of how legends take shape. In the Westfälisches Landesmuseum the Italian artist presented two sculptures related to the German fairytale of the Town Musicians of Bremen, quoting the image of the animal pyramid from twin perspectives. In his 1995 version the animals were stuffed; the later version made expressly for Skulptur. Projekte in Münster 1997 consisted only of skeletons. The titles made an ironic play on the power and endurance of friendship evoked in the fairytale.1

For Out of the Blue Cattelan sunk an artificial female corpse in Aasee lake. The project proposal stipulated that the dummy should float so close to the water’s surface that unsuspecting tourists out rowing on the lake might inadvertently bump into it. As Cattelan intended, the work swiftly spawned legend: rumours about the purported corpse instantly spread. Since the dummy sank quickly visitors soon began wondering whether it had actually ever existed.2

Cattelan’s fourth piece for Münster was based on project proposals for Skulptur Projekte submitted in 1977, 1987 and 1997 that were never carried out. Commissioned by the artist, the art critic and curator Francesco Bonami wrote 21 stories about people who participated in the exhibition or others who did not. To create the impression of an anthology of fairytales the stories were illustrated with drawings in the style of children’s books.3 The texts reproduced in the exhibition catalogue conflate facts and hearsay about tragicomic legends that frequently end in disaster. Similar to Hans Jakob Christoffel von Grimmelshausen’s picaresque novel, from which this work derived its title, Cattelan set out to disenchant his readers. Yet his ironic depiction also underscored the humorous nature of his contribution. 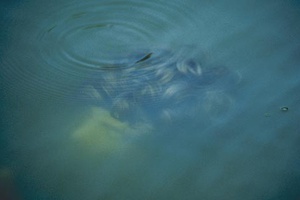 Installation view 1997. Out of the Blue. Photo: Roman Mensing / artdoc.de

Maurizio Cattelan
Out of the Blue