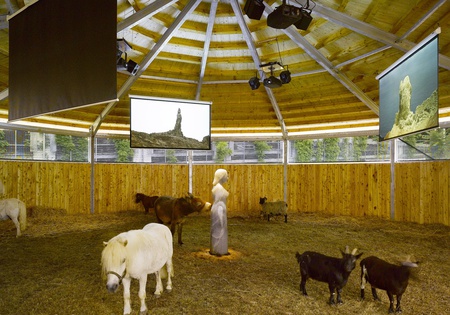 Installation with a wooden pavilion and a petting zoo

The Old Testament story about Lot from the Book of Genesis tells of the only virtuous inhabitant of Sodom, whose wife on her flight from the doomed city defied God’s express warning not to look back. Her disobedience is instantly punished: Lot’s wife is turned into a pillar of salt.

Based on a memory of his children’s Bible Mike Kelley commissioned sculptors at the famous Wieliczka salt mine in Krakow to carve a life-size figure of the woman turned into a pillar. He then placed it in a pavilion that served as a stable with a surrounding corral whose animal residents were free to roam about the complex, inside and out. The animals occasionally licked the salt pillar, causing it to change shape in the course of the exhibition. Three videos showed pillar-like rock formations known as “Lot’s wife” in Africa, Asia and Australia. The references to socially engrained taboos and phobias characteristic of Kelley’s work emerged here against the harmless backdrop of a petting zoo. The story of the “sinfulness of Sodom and Gomorrha”1 can also be taken to apply to the city of Münster where one might likewise encounter social chasms, sinister urges and hidden desires. 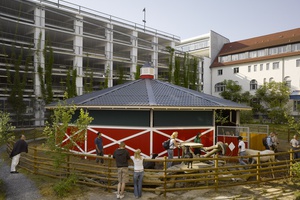 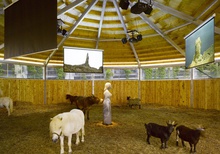