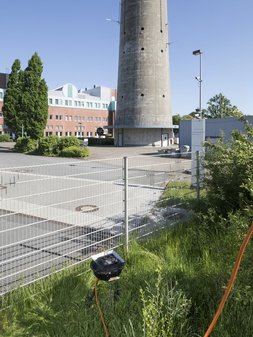 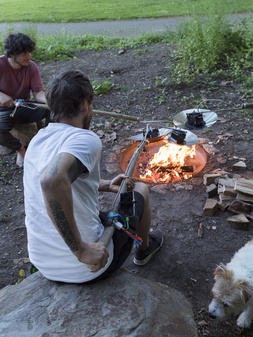 Underpass at the palace square, Schlossplatz 46

Aram Bartholl deals with the possibilities and effects of increasing digitalization in his role as an installation and performance artist. Since the early 2000s he has been actively involved in the production of a digital public sphere — anonymity, open source, and hacking are the key buzzwords of this fledgling Internet generation. In 2010, as part of the project Dead Drops, he showed how conventional USB drives can be cemented into walls as dead letterboxes, thus initiating an on-going international wave of similar interventions. The drives allow data to be exchanged in the urban space without being stored and evaluated by algorithms on the Internet. Although it is normal for large amounts of data to be stored and sent on the Internet and for USB drives to be passed from hand to hand on a private basis, by publicly installing them in an urban setting, he creates disturbing situations for people and—in light of what is already happening and what might happen on any given day—fuels people’s anxieties.

Bartholl’s installations in Münster were all based on thermoelectric devices that directly transform fire — the primeval medium of communication — into electrical energy. At the same time, the artist alluded to three construction projects that have played a key role in Münster’s urban development: the building of the palace (1767) and the canal-water pumping station (1901) and the installation of a DVB-T-antenna (2007) on top of the telecommunications tower. In the underground passageway leading to the palace square, Bartholl hung up five chandeliers, each consisting of ten thermoelectric LED reading lamps powered by tea candles. In the event of an emergency they could serve to illuminate a shelter. At Münster’s Theater im Pumpenhaus, Bartholl provided devices for charging mobile phones: visitors could hold sticks — equipped with generators — in a campfire to charge their phone batteries. On the playground at the base of the telecommunications tower Bartholl set up a small stove, equipped with a thermoelectric generator that provided electricity to the router on the tower without using the Internet. Visitors could log into an offline database via Wi-Fi to download instructions for living without the Internet and upload their own files.

Bartholl’s playful and experimental work contributes to the demystification of technology. It prompts critical, self-determined, and independent interaction with the possibilities of digital networking and is based on an idea closely associated with technē: the arts are combined with craftsmanship, manual dexterity, and self-reflection. 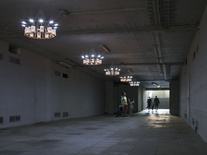