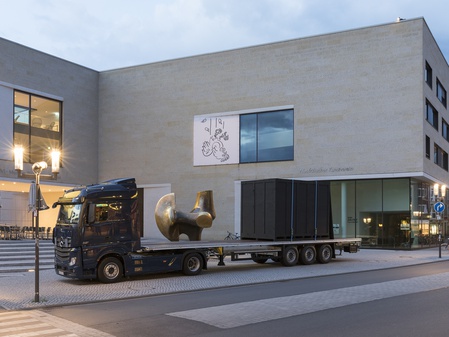 Strategies of cooperation, appropriation, and compilation are characteristic of Cosima von Bonin’s mixed-media installations. She navigates the viewer through a sea of references with her subtle humour, bringing influences ashore without any apparent effort and involving artist friends and historical perspectives in her exhibitions. Energized by Conceptual Art and Pop Art, her work keeps touching on key figures like Martin Kippenberger or Mike Kelley and makes countless references to cinema, literature, music, fashion, design, and lifestyles. In this way, her artwork presents itself more as the result of traditional tendencies, networks, and recurrences than as an original, individual artistic gesture. The large-scale arrangements, often in the form of animal motifs, mirror the conventions and rules of the art world and address von Bonin’s artistic identity within a network of relationships, dependencies, and role models.

Soft textile materials serve as the primary basis for her patchwork-like pictures and sculptural objects, which transform a repertoire of motifs drawn from the world of consumerism. Anthropomorphized animal figures inhabit her theatrical exhibition scenarios, which are reminiscent of a film studio’s prop room or a mythical setting. Von Bonin’s oversized, fluffy protagonists are partly domesticated and partly associated with a maritime environment whose imagery is of great significance. Usually the permanently exhausted creatures don’t give a damn about the societal imperatives of productivity. In their lazy mode of denial we recognize—in addition to the right to be lazy and enjoy a cigarette—an existential condition of fatigue that lends von Bonin’s cosmos a dark undercurrent. This uneasiness also expresses itself in the submissive titles of her exhibitions, such as Kapitulation or The Fatigue Empire. Authority and control are latently present as themes in this parallel world abounding with allusions.

For Skulptur Projekte 2017, von Bonin also drew on her vision of collective authorship and joined forces with Tom Burr—the two have been friends for many years. The project was produced in cooperation with the Westfälischer Kunstverein, which showed Burr’s solo exhibition Surplus of Myself at the same time. Burr has been grappling with questions relating to public space since the late 1980s. Although he makes use of the formal language of Minimal Art, it is charged (contrary to its intrinsic intention) with numerous connotations and references, frequently connected with the emancipation of subcultures and the artist’s personal biography. For their cooperation Benz Bonin Burr, the artists parked a low-loader on the shared forecourt in front of the LWL-Museum and the Kunstverein, not far from where the Henry Moore sculpture is installed. A large-size black box was placed on the truck bed—a recurring feature of Burr’s work. Its contents were hidden from sight, thus creating an ambivalent situation that oscillated between presence and absence, inclusion and exclusion, admiration and Oedipal fixation. It also incidentally alluded to the infrastructure of the exhibition world in general by bringing to mind a potential shipment process. 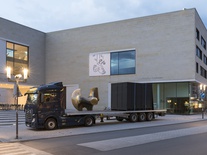