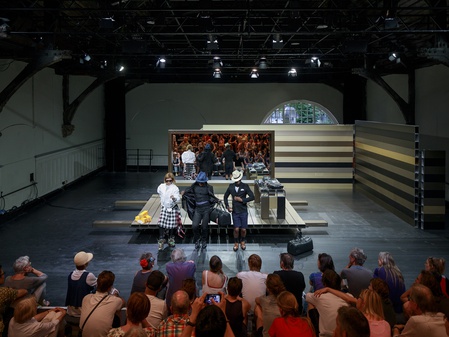 Theatre director Monika Gintersdorfer and visual artist Knut Klaßen have been developing transcultural dance and performance projects since 2005. Together they have generated a differential ethnic and cultural diversity as conceived by decolonization theory in the 1990s. The team bring their productions to life with a network of international dancers, singers, artists, film-makers and character actors. The theatrical performances, which are often discursive and always subversive, are based on the participants’ own stories, an assortment of experiences defined by a variety of religious, political, and social contexts. The works focus on existential themes such as religion, power structures, and the search for identity. The performance is characterized by the clash of particular cultural codes, represented by the performers themselves: they act out their gestures, facial expressions, costumes, and attitudes, countering and supporting one other. The actors confront the audience with their own pointed remarks about politics, the fear of failure, or African gangster pride, while fellow performers simultaneously translate what has been said. The costume designs make reference to African clothing culture and to the sculptural performative art of the 1970s and Europe’s avant-garde.

Over the course of Skulptur Projekte, Gintersdorfer/Klaßen used the Münster Pumpenhaus Theatre as a production site for reruns of fragments of existing works, which could be attended by visitors six days a week: varying presentations of Body Politics alternated with public rehearsals for a new production entitled Kabuki noir Münster. In collaboration with the Japanese kabuki dancer Toyohiko Fujima, whom Gintersdorfer/Klassen met at the Kabuki-za Theatre in Tokyo, the actors developed a performance in which they tried to come close to the kabuki codes to gain a deeper understanding of this form of presentation. Japanese kabuki was created in the sixteenth century as a complex theatrical form that unites dance, chants, shamisen playing, scenery, and the actors’ dramatic expression. Unlike the Western conception of theatre, the scenes in a kabuki performance do not change—the depicted scenes have a ritual character. As the script is recited in the original Early Modern Japanese, even Japanese viewers are given information about the performance via headphones. Through the evolution of this new piece, Gintersdorfer/Klassen hoped to reflect on their own routines and incorporate existing ritual and spiritual dimensions into a new aesthetic form. 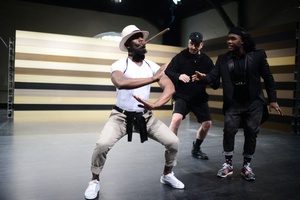 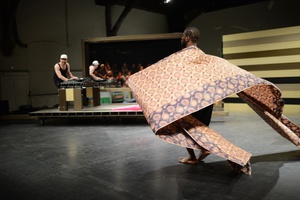 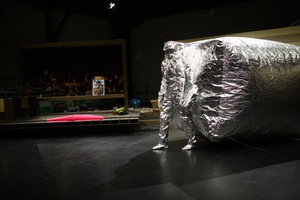 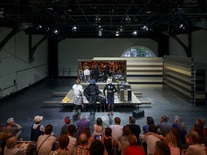