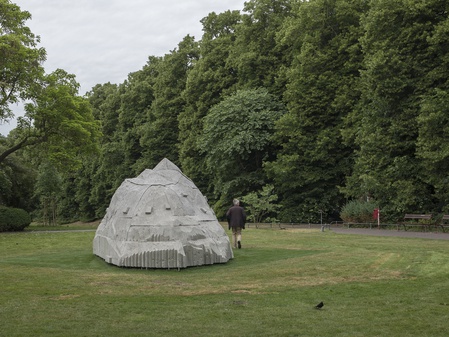 Justin Matherly finds the visual prototypes for his sculptures in books and writings, especially in philosophical texts and the ancient classics, which he refers to both in form and content. In many cases, he even names them specifically in his titles. His porous and often fractured sculptural interpretations made of cement, plaster, and plastic are supported by medical walkers. His work is complemented by photographs that are closely linked to the objects.

Matherly’s sculpture on the grassy area along the promenade looked as if it had fallen from the sky. The surface of the material exhibited cracks and holes in many places. The walkers clearly protruded in some spots and in others completely vanished inside the grey material. As ready-mades or everyday objects, they assumed the function of a pedestal and also become part of the sculpture. In the artist’s conception, these objects introduce a scale that is closely related to the human body. Some of the walkers used in this sculpture were not new and came from the wider Münster area. Despite its massive presence, the sculpture emanated a lightness, appearing to hover above the earth.

The seemingly abstract form has a very specific point of origin: the so-called Nietzsche Rock, named after the German philosopher. On an August day in 1881, according to his own records, the rock by Lake Silvaplana in Oberengadin inspired the idea of eternal recurrence which is an alternative to the concept of a finite state as preached by Christianity. Instead of (a life)time simply running out, eternal recurrence means that ‘the eternal hourglass of existence is turned upside down again and again, and you with it’.1 It is possible to see a symbol of permanent repetition in the monumental nature of the rock: if every moment in life eternally starts afresh again and again, then even the most trivial action is given tremendous weight. Man can allow himself to be crushed by this weight and view every moral act as superfluous. Or he can affirm eternal recurrence and see in it the real motivation for moral behaviour. Based on photographs of the rock, repeated shaping and moulding impacted the three-part creation process of Matherly’s sculpture. ‘I split up forms into other forms,’ says the artist. ‘Nothing ever really ceases to be.’ No copies of original models are produced in this way; rather, it is the status quo of an interpretation that is in the process of becoming an object. Matherly investigates the relevance of our philosophical and aesthetic past by means of his sculpture. Instead of being anchored to the ground like the rock at Lake Silvaplana, the weight of Matherly’s piece is held up by supports that actually symbolize weakness and the loss of mobility and independence.

1 Friedrich Nietzsche, The Gay Science: With a Prelude in Rhymes and an Appendix of Songs, Vintage Books, New York, 1974. S. 273. 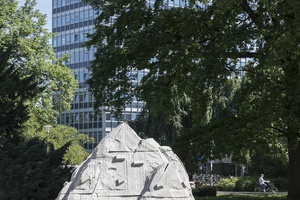 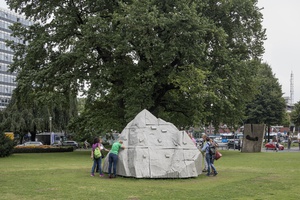 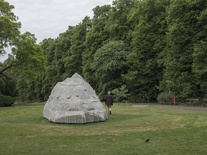