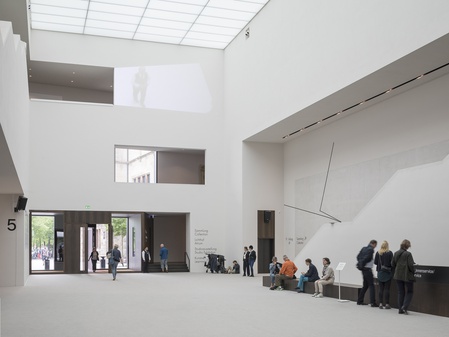 Pointing their fingers at an unidentified event out of frame

Nora Schultz’s artistic interventions develop their tension from material-related actions, forming processes, and their relationship to one another. Everyday materials, language, writing systems, and cultural displacements play just as much a role as the recourse to Post-minimalism. More recently, her focus has shifted, going via performative work with self-constructed printing presses to an engagement with the structures of the exhibition space, which she responds to with expansive installations. By reflecting on the architectural framework that shapes the way we perceive art, her work aligns itself with the tradition of institutional critique.

In Münster, the architectural arrangement of the museum’s foyer represented the starting point for Nora Schultz’s multimedia intervention. The dominant space, which is calculated to impress, was visually, acoustically, and tactually transformed. By covering the skylight with clear plastic sheeting, she modulated the intensity of the incident light entering the room. The carpet was sound-absorbent. Olle Baertling’s (1911–1981) steel sculpture YZI from Marl has been integrated into the stairway setting. Two projections show footage that was made on location using GoPro cameras and drones. In addition to that, Schultz employed infrastructural elements like info-screens that suddenly flash up film clips. Confusing sounds recorded by the unmanned flying objects echoed through the foyer.

The interventions served to recode the entrance area, which has a central function as a framing element for the visit to the museum. The brightness of the room, with its almost virtual effect, typically makes it difficult to get a clear sense of the space, which extends to the full height of the building. Schultz’s work made its design seem more restrained, and its contours more tangible. The flying devices in the films, which were constructed for external use, drift in hectic, unstable patterns through this space, offering alternative views of the room’s dominant structure as the perspective varies back and forth from micro to macro. The drones temporarily suspend the force of gravity, and this same suspension happens in Baertling’s work in model form. The sculpture, which was made in 1969 and seems like a drawing in the space, expresses a dynamic force field with its abstract gesture. The meaning and potential of Baertling’s works lie in the transitive aspect suggestive of an unbounded spatial distance—the concept of ‘open form’ is inherent to his oeuvre.

Schultz treated the museum’s foyer as a diverse sculptural body—a negative space whose edges and apparent void can be modelled and (re-)shaped. By relocating the external form and placing it in the pristine foyer, it also worked as a kind of printer: visitors successively imprinted vestiges of their presence onto the floor of the museum, creating a random pattern. 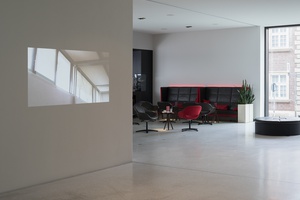 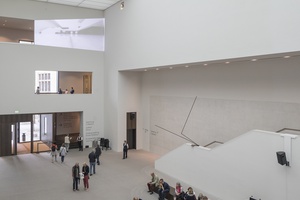 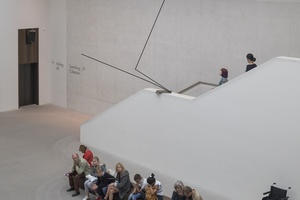 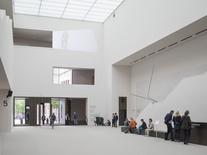