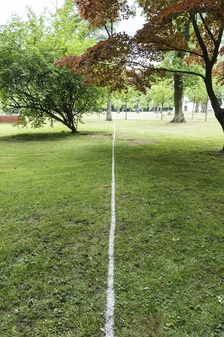 Joëlle Tuerlinckx’s conceptual works are frequently conceived at the edge of the visible. Her installations, which consist of found objects, drawings, display cases, and photos are more like spatial experiences than actual artefacts. Every exhibition is based on a precise study of the room and the particular institution where the work will appear. She then re-evaluates her idea and adapts it to the site in question. She has a special interest here in examining the role of museums in society.

With her work for the Skulptur Projekte Münster, which was carried out as part of the collaborative project The Hot Wire together with the Skulpturenmuseum Glaskasten Marl, Tuerlinckx abandoned the museum’s interior and focuses on the old Sickingmühler Cemetery in Marl. The terrain has been gradually transformed into a public park and is now being used as a sculpture garden by the Museum Glaskasten. The museum itself is experiencing a similar process of transformation, as it plans to move to the former school in Kampstraße on the other side of the cemetery park in the next few years. Based on the concept of a line as a sculpture or form—and tying in with the formalism of Minimal Art—Tuerlinckx created an ephemeral sculpture in the form of a 200-metre line. As part of a performance, the line was redrawn every day, and the imprint it leaves in the public space was retraced with the kind of chalk spray used to mark out playing fields and sports grounds. With the end of the exhibition, the work disappeared bit by bit, dissolving completely.

In terms of sheer size, Le Tag invoked the monumental land art of the 1960s. It staked off a piece of land and defined a space. At the same time, it is a graphic element and a conscious designation by the artist: a signature similar to a tag, the personal initials used by a graffiti sprayer to brand his work. But LeTag also played with the German word Tag (day) and the daily repetition of the action of drawing a line. How do we perceive time? How can it be depicted? And what are the traces that the twentieth century leaves behind? These are the questions Tuerlinckx keeps on asking in her work.

The principle of rethinking existing works, repeating them, copying them, and transcribing them—and, in so doing, further developing an idea—runs through her entire oeuvre. Lines, points, and circles and their multiple levels of meaning not only as formal bodies but also as symbols, systems of signs, and organizational systems are to be found both as forms drawn in two dimensions and as physical objects. Site intervention and manipulation: these are her starting points as she sets out to tackle an exhibition situation. 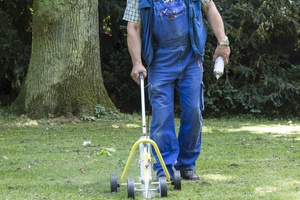