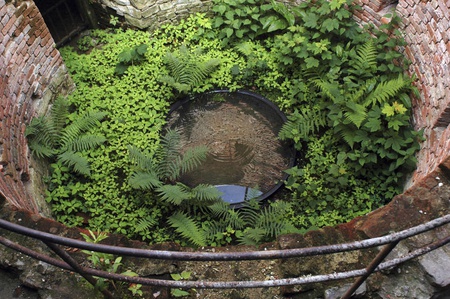 Zwinger on the Promenade, since 1997 permanent installation

* 1944 in Michelstadt, Germany
lives and work in Berlin and the Odenwald region, Germany, as well as in New York, USA, and Paris, France

Rebecca Horn had already realised Concert in Reverse on the occasion of Skulptur Projekte in Münster 1987. In 1989 the work was purchased by the city, however it was only inaugurated shortly before the 1997 edition, following the protracted restoration and securing of the Zwinger ruin. The installation was adapted to the new specifics of the site.1
Horn’s complex structure comprising individual components evokes the Zwinger’s eventful history. It was constructed between 1528 and 1536 as part of the city’s fortifications, in the 18th century it was used as a prison, before serving as an emergency shelter in the wake of the First World War. Finally it was sequestered by the Nazis, intermittently accommodating the Hitler Youth, before from 1943 onwards being the site for numerous Gestapo executions of prisoners of war. As a result of extensive bomb damage, the Zwinger was sealed up with bricks in 1945, its inaccessibility enabling a natural habitat to thrive within it. Even 40 years later, in the 1980s, the Zwinger concealed an unspoiled wilderness within. Concert in Reverse is an intervention and staging of ciphers, addressing the ruin’s history, supplying additional perspectives that both expand it and provide opportunities for individual experiences.

Fragments of the former windowless dungeons exist in the Zwinger’s basement vaults even today, whilst on the ground floor the outer walls feature narrow recesses. Red grave candles have been placed in these niches, and mechanical hammers attached to the inner walls at varying heights, generating a continuous knocking. A strong contrast to this sound space is established by the brightly lit but nevertheless enclosed inner courtyard that follows, the layout of the former prison cells still identifiable from its walls. From the middle of the space a glass funnel is suspended within a strutted construction. Every 20 seconds a drop falls into a basin let into the floor, breaking the water’s surface and causing ripples. “The circular ripples subside into a black mirror, until the next drop signals a ‘reverse concert’. A pair of earthbound snakes follow the comings and goings as the months pass,” is how the artist describes her installation.2 The pair of snakes that were to be kept in a terrarium on the upper floor, were replaced in 1987 by two curved steel arms that slowly move towards each other. Another rather fragile installation is located close to the stairs on the upper floor, its two steel struts holding a goose egg.