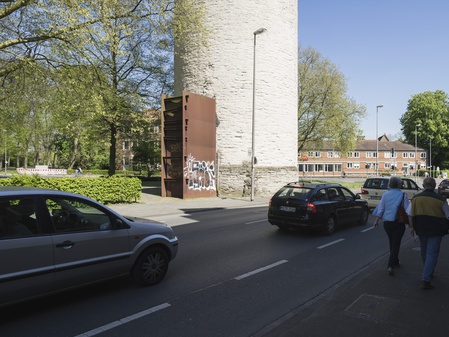 Susana Solano’s work Intervención en Münster is an artistic intervention in the historic fabric of the Buddenturm building. The heavy iron sculpture addresses both the distinguished character of the building and the medieval tower’s original use: the Buddenturm is the oldest preserved building from the city’s former fortifications, dating from the 12th century. Originally intended as a fortified tower, in the course of its history it has served as a prison, gunpowder store and later as a water tower. Following the dismantling of the remaining fortifications in the 18th century, its military function was largely lost. In 1879 the City of Münster acquired the building.

Remains of the old city walls are still standing to the west and the east side of the tower. Solano chose to attach her construction to the west side. She completely enclosed this fragment of the ramparts, using three steel panels to create a housing for it. The panels are connected by solid, irregularly diagonal steel beams. Unlike the first project proposed by the artist, Muralla Transitable [Modifiable Ignition Fuse], which envisaged extending the remains of the wall and was conceived as a reference to its former function as a gunpowder store, the extant work eschews any kind of reconstruction or building extension.1 The austere modernist aesthetics of the work abstain from any romanticising of the Middle Ages.

Solano’s work locates itself formally and materially in the tradition of modern iron sculptures – such as that of Julio González (1876–1942) or Eduardo Chillida (1924–2002). Like many of her works from the late 1970s and 1980s, this iron sculpture too explicitly references the geographical and historical identity of the site in question.2 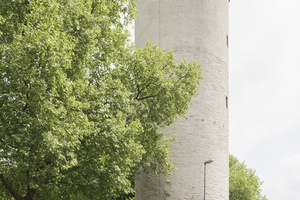 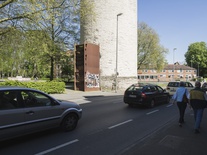