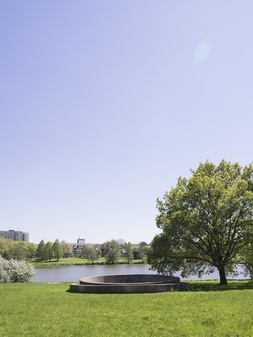 In 1977 Donald Judd installed two concentric rings of concrete on the slope to lake Aa. The inner ring, similarly to the mirror surface of the lake, is horizontal, the outer aligned to the slope of the hill grass. Depending on the position of the viewer, the perspective changes as do perceptions of the two circles and their interrelated positioning in an open space.
“Three dimensions are real space. […] Actual space is intrinsically more powerful and specific than paint on a flat surface”, Judd commented in 1964 concerning approaches to volume.1 Instead of spatial illusion, Judd demanded an immediate experience of his work, which also contrasted with the European ideal of representational sculpture. His essay Specific Objects from 1964 is often read as being a manifesto for a new American art which rejects the significance of illusion and representational space as opposed to real space. Using painting as a point of departure and searching for ways lending colour a sculptural form that enabled it to act in space, Judd broke, during the 1960s, with prevailing artistic strategies.

As in much of his work, the rings likewise alternate between simple open and closed geometrical forms; the oppositions of beginning and end, solid and hollow cancel each other out. Even though Judd always rejected Minimal Art as a description of his artistic practice, he is nevertheless regarded, together with such artists as Robert Morris and Sol LeWitt, as one of the founders of this art movement that emerged in New York during the 1960s. The form and material of his serial and industrially fabricated objects bear a close relationship to one another. Such a merging enabled Judd to insist on the object quality of his pieces. Their potential interpretation does not extend beyond the object itself; they are not symbols for something else. His art was not to be representational, but rather – invariably with the human scale in mind – a physical experience. The viewer is able to realise, “that they themselves, in changing their point of view, the lighting and spatial context, create the relationships, and the defining of scale is a function of the size of their own bodies.”2 Judd’s works relate completely to their surroundings and the specifics of their landscape-topographical or architectural setting. The two concentric concrete rings in Münster are a virtually idealised version of the existing topography. 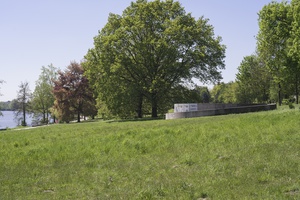 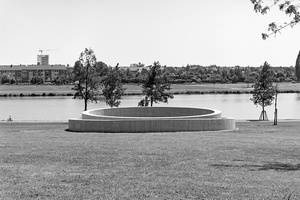 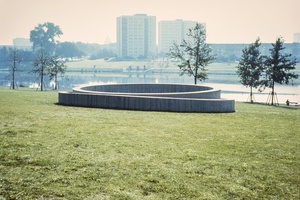