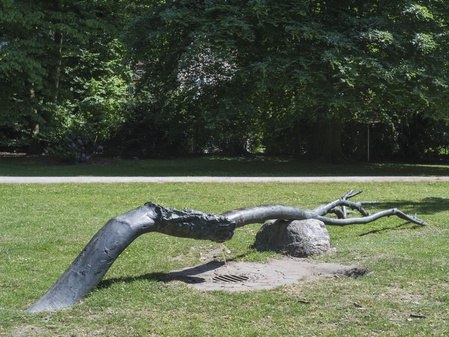 * 1947 in Garessio, Italy
Lives and works in Turin, Italy, and Paris, France

As a representative of Arte Povera, Italian artist Giuseppe Penone has always addressed the connection between man and nature and their processes of growth and decay in his installations and objects. In 1968 he devoted a work, Continuerà a crescere tranne che in quel punto [It Will Continue to Grow Except at That Point], to this subject for the first time. For this installation the artist fabricated a bronze cast of his own hand, as it would be if grasping a tree trunk. He attached the cast, an alien body, to the trunk of a young tree, which it would thereafter be forced to grow around.

The tree remains a leitmotif in Penone’s work which he also returned to for Fountain Project for Münster. In the old Hörster cemetery, now a park, a crooked, seven metre long bough lies on a grassy lawn, supported by a stone. As if by chance, a cobblestone edged gully is located under the bough. On closer inspection the bough reveals itself to be a bronze from which water flows. However, the water does not simply gush from the bough’s innards arbitrarily, but flows instead from the impression of a handprint in the bronze. Springing from its five fingers, it accumulates in the palm, and then continues to run along the imprint of a forearm until it finally disappears into the hole in the ground. It is collected there and pumped from deep underground through a well-shaft which was specifically drilled for the work, back to the bough, resulting in a circular flow. Penone described the process as follows: “It is water that has flown underground and knows the secrets of the Earth.”1 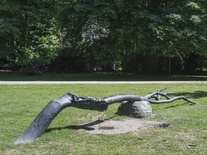