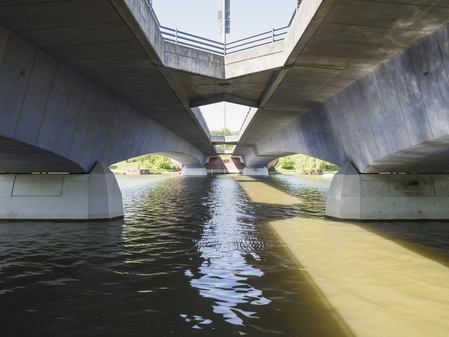 Lake Aa, under the Tormin bridge, permanent installation since 2008, played on Sundays between 10 am and 6 pm

The Barcarolle from Jacques Offenbach’s operetta The Tales of Hoffmann can be heard under the Tormin bridge on lake Aa on Sundays from 10 am to 6 pm.1 The artist herself, Susan Philipsz, sings the well-known melody. Inconspicuous loudspeakers attached to the bridge’s pillars are the sole indication of the singing’s source, which nevertheless remains difficult to locate. The musical motif is initially played on one side of the lakeshore for one voice only and then repeated via the loudspeakers on the other shore. The second voice then begins.

The symmetrical architecture of the bridge is reminiscent of a vault which becomes the backdrop for the light reflections from the water, producing fleeting and ever new impressions, while the piece is playing. Any search for its visual presence leads to nothing – only the futuristic and weatherworn concrete surface of the bridge, the opposite lakeshore and the water are to be seen. No object, but for the mere suggestion of a modernist stage set is observable. Here Philipsz is alluding to the post-expressionist stage architecture, in gaudily coloured Technicolor, from the film musical The Tales of Hoffmann (1951),2 in which Giulietta, a Venetian woman standing in a gondola, sings a duet with her mirror image. Later she steals the mirror image of Hoffmann, the story’s protagonist.

In the process of perception, of both the site and the ephemeral sound space, the boundaries of traditional sculptural concepts are challenged. Philipsz explores the physical aspects of sound and song; the carrier of voice – as in other works by the artist – remains absent, yet it is also the component that lends structure to the installation. The sound itself defines a space that the temporal factor both delimits and rhythmatises.3 The Lost Reflection creates in passing a fragile, subjective perception and a search for presence. A discernible but intangible space is repeatedly created, bridging the distance to the other shore, but then to once again abruptly disappear. The processes of mirroring, responding and repeating play on the site to itself, on the artificial landscaping of a romantic lake: lake Aa was planned at the end of the 19th century on an area of swampland, from where the city was regularly flooded up to the Überwasserviertel, the so-called above-water district. Construction work was only completed during the 1930s, and today it is one of the city’s main attractions, despite on-going issues with poor water quality due to soil contamination from agricultural pesticides.

1 During the skulptur projekte münster 07 the piece was played daily from 10 am to 6 pm. 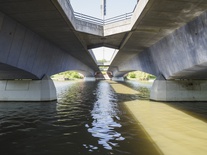