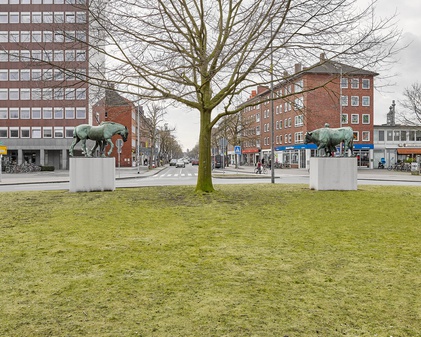 Roundabout at Ludgeriplatz at the exit to Hammer Straße, permanent installation

During his research prior to the Skulptur Projekte in Münster 1987 Rémy Zaugg became aware of the bronze sculptures Knecht mit Pferd [Farmhand with a Horse] and Magd mit Stier [Maid with a Bull] by the sculptor Carl Hans Bernewitz. The sculptures were initially conceived in their original 1912 location as a welcome to Westphalian farmers and traders, entering the city from the south. Like a triumphal arch, symbolising livestock and arable farming, the two animals approaching each other stood on approximately two metre high plinths at the junction to, what is today, Hammer Straße. By the beginning of the 1960s however the bronze statues had lost their function. They were removed from their plinths and positioned side by side, as if harnessed in front of a plough, next to the roundabout in front of Stadthaus II.1 At the time that Zaugg visited there was a building site at Ludgeriplatz, so that the pair of sculptures were additionally surrounded by construction site fences and containers.

To prepare for the exhibition in Münster, Zaugg made a critical investigation of the futility and omnipresence of sculptures in public space. The condition the ensemble was in confirmed his assumption that sculptures in general suffered from neglect and as a result lost much of their impact. Consequently, his proposal for the Skulptur Projekte in Münster 1987 intended to return the two sculptures to their original location where they were once again to be placed on high plinths and facing each other, restoring them to their former position and function. This enabled Zaugg to criticise the paradox of the city of Münster inviting artists to create works of art in public spaces every ten years, but still being faced with the responsibility of preserving existing sculptures for posterity.2 He makes reference to the existing inventory of works of art and monuments which frequently become neglected, whilst simultaneously recalling the responsibilities that this tradition entails. Zaugg’s translocation led to enthusiastic interest among local inhabitants and provoked animated discussions about the transformation of the city, its culture of remembering as well as the productive momentum inherent to art in public space. 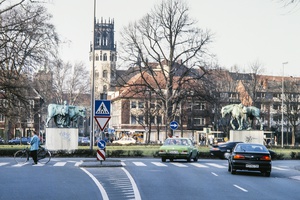 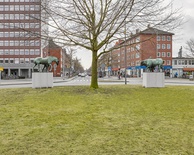