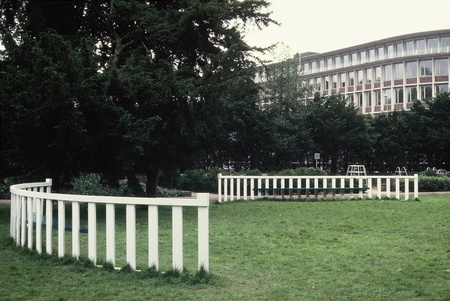 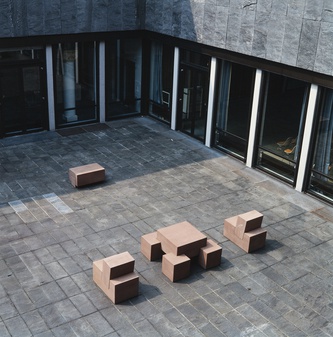 Pair of Park Benches. Designed for Münster in 1986

Park at Engelenschanze. Temporary installation for the duration of the exhibition.

After the exhibition erected at Warendorfer Str. 22–24, but since removed due to their poor state of preservation

Foyer of the Westfälisches Landesmuseum.

Inspired by a visit to Henry van de Velde’s Hohenhof villa in Hagen, Scott Burton designed two elegantly curved benches that in 1987 were installed facing each other in the park at Engelenschanze.1 Each fence-like structure was painted white and incorporated a smaller seat of dark wood, which conveyed an impression of lightness. Taking a tree as their point of departure, the benches opened out, tracing the contours of an oval. They thereby established correspondences with the paths crossing the park as well as with the structure of a nearby building and a climbing frame in a playground.

Burton also designed a table, two chairs and a bench for the foyer of the Westfälisches Landesmuseum. The block-like, heavy-looking set of furniture was made of Baumberg sandstone, Münster’s traditional local building material.

Similar to the works of his friend and colleague Siah Armajani, who created his Study Garden in Münster this same year, with his objects Burton blurs the boundaries between furniture and sculpture, between applied and fine art, and between display and utility value. The sobriety of their appearance, based on a minimalist repertoire of forms, is counteracted by their practical usefulness and social dimension. Just as Burton’s sculptures reference their surroundings in their shape and material, they reflect the artist’s interest in combining art with design and social issues. Associated with reduced physical activity such as sitting or lying down, they can be experienced at a tactile level that goes beyond pure visual contemplation. Burton opposes an autonomy of art, whose elitist isolation he regularly criticised.

Scott Burton
Pair of Park Benches. Designed for Münster in 1986

Scott Burton
Pair of Park Benches. Designed for Münster in 1986 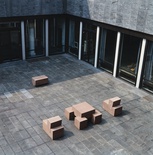