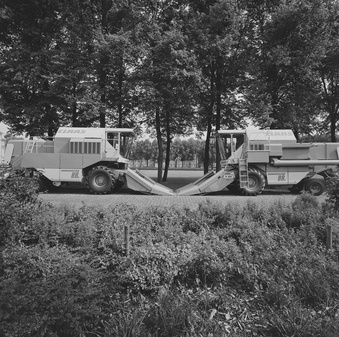 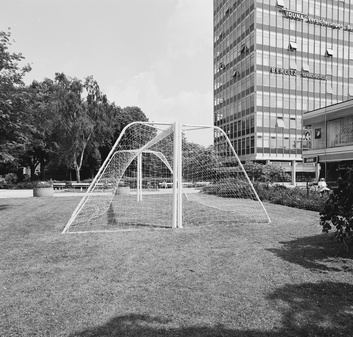 On the grassy area west of the building on Servatiiplatz 7.

lives and works in Paris, France

At Skulptur Projekte in Münster 1987 Ange Leccia presented two installations, each consisting of two identical, industrially manufactured objects set in a mirror-symmetrical constellation. In one, he erected two goals face to face on the lawn at Servatiiplatz square. Following the same principle, for two weeks he stood two combine harvesters (from the model range “Claas Dominator”) face to face directly in front of Münster palace.1

Since the 1980s Leccia has created installations from commercially available objects placed opposite one another. His arrangements are variations on the idea of ready-mades, yet without adopting Marcel Duchamp’s concept of using indifferent objects. Instead, the artist sets his installed objects in combination with their immediate surroundings to formulate socio-political commentaries.2

In Münster the work Zwei Tore visualised separation and union. The goals were placed on Promenade on the spot over which in the Middle Ages the city walls, i.e. that is the city boundary, would have passed. A few steps away a monument erected in the 1960s stands as a reminder that Germany cannot be divided.3 Leccia was thus commenting on the political reality of two separate German states, which he hoped one day would be reunified – two years before the Berlin Wall did indeed fall.

Installed for just a brief time in front of the palace, the work Zwei Mähdrescher focused on the subjects of contradiction and continuity. The combine harvesters came from the agricultural machinery producers Claas, located in Harsewinkel in eastern Westphalia. Leccia’s installation of two successful products of local industry was set against the backdrop of the palace that had been rebuilt after the war. While the traditional exterior of the palace expressed continuity in the region’s quest to affirm its identity, the colossi of agricultural technology – here anointed as art – were a reminder of Germany’s “economic miracle” and the changes this brought on. 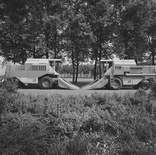 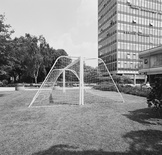