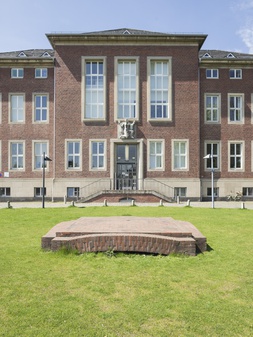 A further sculpture in an interior space: atrium of the Westfälisches Landesmuseum, dismantled after the exhibition

For Skulptur Projekte in Münster 1987 Per Kirkeby located two objects on the square in front of the Schloss and a further one in the Landesmuseum. Whilst the work in the museum’s atrium was dismantled after the exhibition, the two outdoor sculptures have remained in the urban open-air space.1 They are framed by the Residenzschloss, the baroque palace built by Johann Conrad Schlaun, to the west, and one of the city’s main arterial roads running to the east.

For several years the lawn and cobblestone areas on which the sculptures are located have served as a municipal venue for a diverse range of events, the brick sculptures rather naturally merging with the urban fabric, and hardly standing out at all from the nearby brickwork transformer station and other functional buildings in the vicinity.

The artist has provided the low-lying square sculpture with abutments in all four corners and the suggestion of flying buttresses, alluding to the layout of a Greek cross and simultaneously referencing an architectural element traditionally employed in church and bridge construction.2 In its direct vicinity Kirkeby erected a similarly square sculpture, rising to a height of about five metres and featuring arch-shaped, sealed-off openings in the middle of all four sides.

In adopting such material and specific architectural details he is quoting styles of construction that dominate the Münster cityscape. In referencing extant construction principles, the objects enter into a dialogue, not only with the nearby architecture of the baroque palace, but also the more mundane residential buildings in the Westphalia region. The third brickwork sculpture is a kind of hybrid of the two outdoor objects; it too commented on the relationship between architecture and sculpture as well as that between function and artefact, against a backdrop of the museum’s historic atrium. 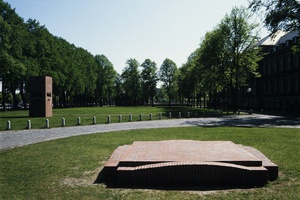 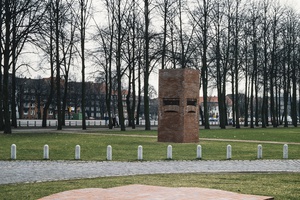