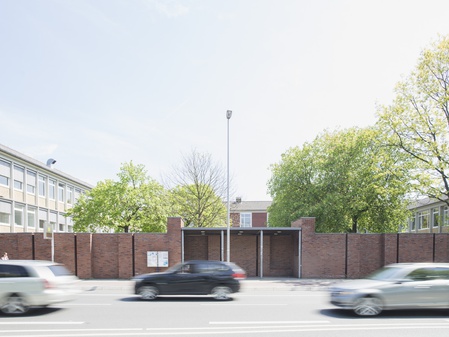 In 1997 Per Kirkeby constructed a brick bus stop and bordering wall along the boundary to the yard of a school, the former Freiherr-vom-Stein-Gymnasium. Initially he had been pursuing another idea for a public building project, titled Kleine Markthalle für Fahrräder [Small Market Hall for Bicycles], in front of the Apostel church; however this was rejected by the municipal planning authorities in 1996. As an alternative Kirkeby conceived Bus Stop, close to the castle, consisting of a shelter for up to 50 people as well as a noise and visual barrier separating the school yard from the adjacent four-lane road. He combined a work of art and utility building into a piece of urban architecture, using an unobtrusively formal artistic language. This finds expression in the projections and recesses that supply the brickwork with a rhythmic composition, the slender metal columns and the windows’ square apertures defining the waiting area.

The artist replaced a previous waist-high bordering wall with an almost three metre high and over 50 metre long wall. The meandering structure featuring vertical grooves is simple yet ornamental. The middle segment recedes, providing space for the waiting area which is open towards the road. In the rear wall recesses, brickwork projections function as seating facilities, and the elevated sidewalls of the bus shelter feature window apertures towards the courtyard at a height of 1.5 metres. A slightly sloping wooden pitched roof covers a simple steel construction consisting of four struts towards the street and courtyard side. Kirkeby equipped the wall recesses on the courtyard side with wooden surfaces to provide seating for school children. However, he nevertheless noted in his sketches that the waiting area was not to be considered a building as such, because the wall and semi-roof remained “independent elements” that had merely been slid together.1

Kirkeby’s choice of materials and method of construction reformulated Münster’s traditional brickwork architecture which he had already made reference to in Backstein-Skulptur [Brick Sculpture], his contribution to Skulptur Projekte in Münster 1987. Since the 1970s he has been siting works consisting of bricks that combine sculptural and architectural qualities, in the open air, from the end of the 1980s developing these to become accessible constructions and finally functional buildings. Kirkeby staged Bus Stop as a temporary waiting area that raises issues concerning the potential of art in public spaces. 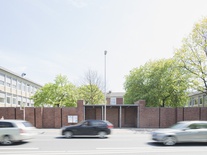