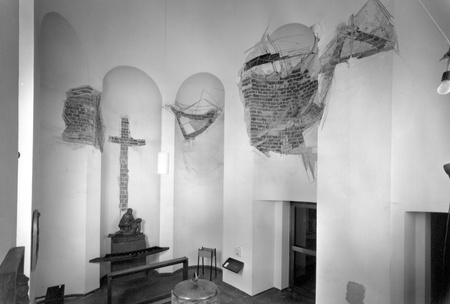 Wall work, consisting of cuts made in the plaster and partial removal of the plaster

lives and works in Munich, Germany

Olaf Metzel’s first visits to Münster during the conceptual phase strengthened his resolve to stage his contribution to Skulptur Projekte in Münster 1987 in a church interior. After corresponding negotiations he executed a series of sketch-like reliefs in the white plaster of the baptistery in the Catholic Erphokirche. He used a cut-off saw to gouge rough lines and the forms of symbols such as a cross and triangles in the layer of plaster and inside the rounded arches. Revealed beneath the gaping gashes, some up to 4.5 metres long, was the vibrant earthen red of the regionally typical brick wall.

In his works in public space Olaf Metzel uses simple means to critically address social issues. The artist felt challenged by the impression Münster made on the artist as a clichéd conservative Christian city to formulate an artistic response, prompting him to produce a work for a church interior for the first time in his career. At first, Metzel sought to alter the space with pigmented cement, graphic lines and by emphasising the window embrasures. To heighten the visibility of the brickwork he modified his original idea: his ultimate version of the work came about during his treatment of the plaster.

The outcome might have struck some viewers as a wilful act of vandalism or even brought to mind the destructive fury of Christian extremists in the former Anabaptist kingdom of Münster. In fact, Metzel’s technical intervention in the plaster was rooted in a long sculptural tradition.

The result of his personal impressions of the place and its residents, the wall work initially sought to portray a reactionary society. However, elements that were excessively provocative towards the people of Münster were already toned down in the development phase when the responsible church minister, Johannes Hageböck, and his congregation lent their support for a dialogue between church and contemporary art in St. Erpho church.1

As such, Metzel’s work was also a metaphoric visualisation of the process of familiarisation, to which clichés often offer an easy, though merely superficial introduction.