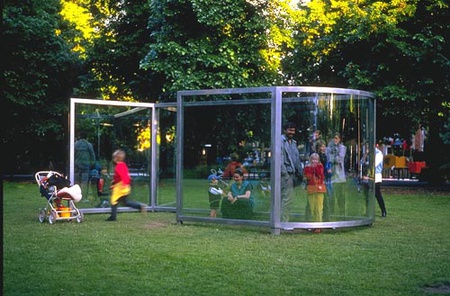 Promenade area to the west of Neubrückentor, opposite the children’s playground. Temporary installation for the duration of the exhibition

For Skulptur. Projekte in Münster 1997 Dan Graham created a pavilion made of two-way mirrored glass similar to his Oktogon for the 1987 exhibition. On the promenade near Neubrückentor he installed his Fun House für Münster in the shape of a narrow parallelogram with three straight sides, of which one long side incorporated an entrance. One of the two short sides consisted of a concave transparent mirror facing inwards or, respectively, of a convex mirror facing outwards. Similar to the optical illusions encountered in the halls of mirrors at funfairs the pavilion’s reflective sides created distorted images that were reflected back by the flat panels.

The two-way mirror glass Graham chose for the pavilion is frequently used in the architecture of office and bank buildings. Depending on the incidence of sunlight at any time it presents both reflective and a transparent surfaces, as well as capturing overlayered views of the surroundings. Thus the light situation at any given moment determines whether one sees one’s own reflection or the people behind the mirrored glass. This constellation which has preoccupied Dan Graham for decades, whether in performance, film or architecture, is also familiar from the display windows of shopping centres. Here one often catches sight of one’s own gaze or reflection superimposed over that of another passer-by also looking at the window display.