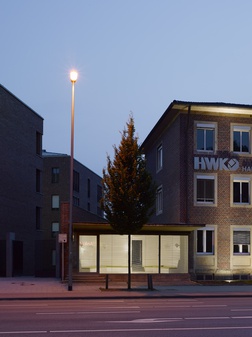 Showroom of the Handwerkskammer (Chamber of Trade), Bismarckallee 1, entrance via the car park. Installation for the duration of the exhibition skulptur projekte münster 07

lives and works in Brussels, Belgium, and Münster, Germany

The children’s game “Chinese Whispers” – aka “Stille Post” (silent post) in German, “Téléphone Arabe” in French and “Telephon Maqtoa” (broken phone) in Arabic – acts as a point of reference and the title for this work by Suchan Kinoshita. A secret message is whispered by one player to the next, and as it passes along it undergoes a number of minor changes that magnify down the line. The game is way of directly and subtly experiencing the fragility of communication. Inter-subjective comprehension verges on serendipity.

Kinoshita transformed this children’s game into a self-referential experiment in which the game situation was supplemented by different technical recording situations. But the technical set-up should not be equated with a neutral observer. Instead, it contributed additional “noise” and “distortion”. The recordings were not a means of objectively monitoring the communication process. Rather, as further components of the process needing to be deciphered they compounded the existing experimental arrangement, themselves acting as agents of transformation and interpretation. In consequence, further misunderstandings were inevitable.

The sources for the messages Kinoshita used were magazines and writings by a variety of philosophers and theoretical linguists, supplemented by gratuitous neologisms, inventions and arbitrary disruptions by the speakers. Eventually, the finished recordings were played to visitors in the ambient of the Chamber of Trade showroom. Inside the space they were on public display as contemplative listeners, as if acting out an interpretation of Marshall McLuhan’s dictum “The medium is the massage”. 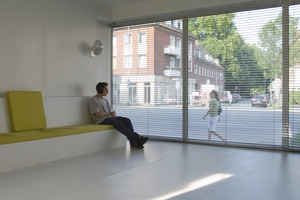