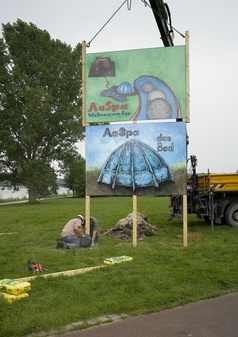 Aaspa – Wellness am Aasee [Aaspa – Rest & Relaxation at the Lake]

Temporary installation for the duration of skulptur projekte münster 07

From the 1990s on, artist Annette Wehrmann developed performances, installations, actions and temporary interventions in urban space that focused critically on issues of economics, capital and private ownership. For skulptur projekte münster 07 she blocked off a section of the shore by Aasee lake, south of the Freilichtmuseum Mühlenhof, a popular area for walking and cycling. In this place she set up a construction site for the fictional corporation AaFit+Well AG, a venture which was seemingly planning to build the spa hotel Aaspa. The various materials that gradually accumulated on the site, such as a pile of gravel, plastic sheeting to protect the trees, construction machinery and containers, were evidence of the pretended progress of the project’s construction.1

Two building site signs painted by the artist illustrated the projected designs of the spa complex, whose architecture resembled a futuristic igloo and was reminiscent of works by Mario Merz. In addition, the sign also showed Aasee lake, in which Claes Oldenburg’s Giant Pool Balls were depicted as part of the imaginary open-air water park.

The project’s design and cordoned-off area fostered debate about the contradictions between publicly accessible space, its privatisation through investors and their promises of wellbeing for the community at large.