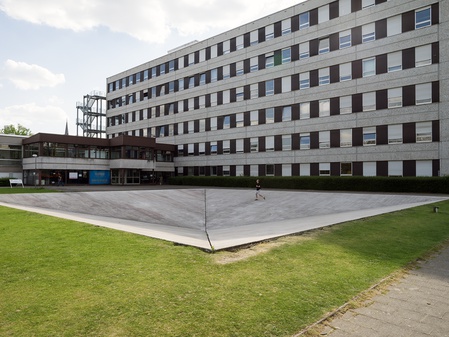 LWL-Museum für Kunst und Kultur, Münster, acquired in 2009 with the support of Sparkasse Münsterland Ost and the Federal State of NRW

Occupying the angle between two high-rise buildings, Bruce Nauman’s sculpture Square Depression is an inverted pyramid shallowly recessed in the ground that the public can walk on. Four white concrete planes on a 25 x 25 metre square base incline in a funnel shape towards an apex. Walking onto the pale surfaces means being virtually exposed: “Entering thus amounts to a disappearance, but one that is actually an exposition as well, for one moves on a negative stage.”1 The viewer’s position enters them into a direct relation to the sculpture, the environment and public space. Depression means both “incline” as well as “depression” in the psychological sense. Equally square can be interpreted colloquially as meaning “conformist” or “old-fashioned”.

Material and form correspond to the cubic grid architecture of the surrounding buildings from the 1960s. Münster University’s Institut für Kernphysik [Institute of Nuclear Physics] and Institut für theoretische Physik [Institute of Theoretical Physics] create the impression of an array of colossal geometric concrete structures interacting with Square Depression. The sculpture had been planned as early as 1977. After 30 years, the work was finally realized in 2007 according to the original design and location, where the structural conditions still corresponded closely to those of the 1970s. The only change was to the solution for water drainage.

The human body, its position and movement through the negative space provide the basic scale for apprehending the sculpture. Body and space are mathematical concepts and equally the sculpture’s constitutive parameters, as is the time in which a perception occurs. They are notions conjuring mental associations and images. Viewing habits place limits on the imagination, the relativity of space and time for example being retained as an abstract idea. The estimation of distances and heights becomes more difficult when observing them within Square Depression, as dimensions and proportions appear visually distorted in the manner of a picture puzzle, enabling the artist to address the relationship between art and science. 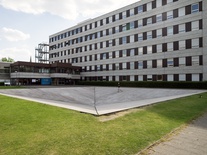