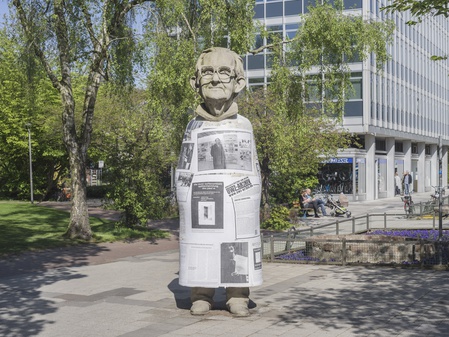 From the exhibition until 2010 installed in front of Stadthaus I, Klemensstraße.
Purchased in 2010 as a result of a civil initiative and citywide fundraising, following which it was relocated to Servatiiplatz where it currently remains

As of February 2, 2022 Münsters GESCHICHTE VON UNTEN has been removed from its site. It will return after the redevelopment of the Servatiiplatz is completed

* 1968 in Göppingen, Germany
lives and works in Frankfurt/Main, Germany

Silke Wagner’s contribution to the skulptur projekte münster 07 is a hybrid of figurative sculpture and an advertising column that corresponds to the content of the website www.uwz-archiv.de.1 In Wagner’s work, Münster resident Paul Wulf, who died in 1999, becomes a projection surface: Wulf exemplifies civil resistance and the anti-fascist struggle in post-war Germany. Well-known in the city, he marched through the streets with a briefcase full of documents and newspaper articles, confronting his fellow citizens with his personal history. In 1938, at the age of 16, he had been forcibly sterilized under the Nazi’s programme of racial cleansing. In a fight for recognition of his case, he went through all possible judicial authorities. During the exhibition his sculptural portrait, created by Herbert Rauer, was covered with posters, in a similar manner to an advertising column. Documents from UWZ, an environmental campaign organization which owns one of the largest alternative archives in Germany, provided insight into Wulf’s life story, as well as the anti-nuclear movement, urban warfare in Münster and the political censorship of texts in Germany. The website www.uwz-archiv.de, which is named on the sculpture itself, provides a wealth of additional material from the archive’s digital inventory.

Following the end of the exhibition there was some political controversy in the city about whether the work should remain. Contradicting the recommendations of the relevant consulting committee on art, a purchase of the work by the City was initially refused and its retention in front of the Stadthaus rejected in principle. Only in the wake of a civil initiative did the city acquire the work in 2010, relocating it to Servatiiplatz, where it is to remain until 2017. Wagner believes that public awareness arises when consensus collapses.2 This is an attitude typical of her projects in public spaces. The larger than life figure critically highlighted – especially at its original location in front of the Stadthaus – the city’s self-image and the politics of memory, raising the question of from whose perspective history is written. In addition, the UWZ archive as a store of alternative narratives provides the project with a different kind of public. The attention which the work generates, a catalyst for public debate far beyond the context of the exhibition,3 are essential elements of the work.

3 The renaming in Münster of Jöttenweg, after Nazi eugenicist Karl Wilhelm Jötten, as Paul-Wulf-Weg, in 2012, was the result of a civil initiative that had been fuelled by Wagner’s project and the subsequent debates. 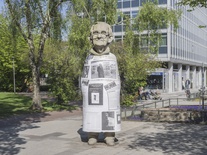