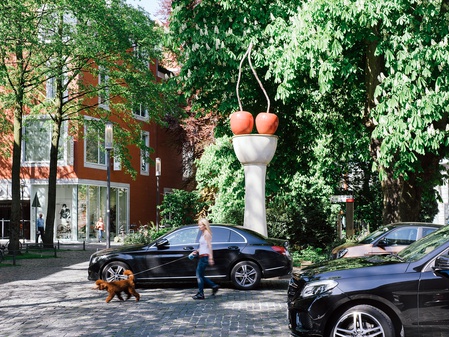 * 1954 in Oldenburg, Germany
lives and works in Düsseldorf, Germany

When during a tour around Münster during the 1980s Thomas Schütte visited Harsewinkelplatz, it was still a thoroughfare and parking area for cars. The city tolerated the chaotic and vibrant jumble of bicycle racks, parking meters, a few trees and telephone boxes. These random and unrestrained activities inspired Schütte to comment on the common exploitation of public art as a valorisation of squares and facades. As in much of his artistic work, the artist turned to the cartoon, employing exaggeration, excess, distortion and sarcasm to “garnish” the city of Münster with yet another sculpture.1

In the middle of the square, on the site where shortly before a large tree had stood, Schütte placed a monumental column of sandstone from the local Baumberge hills. Typical of the Münster region, this was also the material that was used in the construction of the cathedral and Prinzipalmarkt. The column consists of the conventional architectural elements base, shaft and capital, even if in unusual proportions to each other. Deliberately rather too bulky, the rounded capital recalls a board game figure, a candlestick or a chalice. The traditional material contrasts with the language of post-modern design for the base and a gaudy, shiny pair of cherries resting on the capital. The aluminium cherries lacquered bright red, their erotic sensuality, seductively crowning the centre of the square, also evoke associations with Pop Art.

The Kirschensäule [Cherry Column]’s design enables Schütte to comment on the wide range of potential qualities and functions that art in public space may possess, being not only a sculpture and a monument, but also a reference to the site of its installation. Furthermore, during the decades it has been there, it has not only become a symbol of the city, but also curiously provided the momentum for a structural redesign of the square. It is especially this development that underscores the irony of this work, as it was precisely the unusual structure and the architecture of the square that enabled the Kirschensäule [Cherry Column] to display its own absurdity, “garnishing” the urban environment both literally and figuratively. 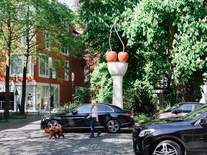