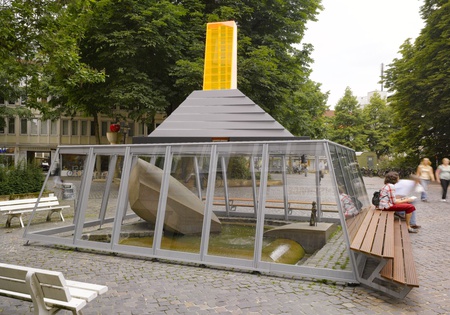 Harsewinkelplatz. Temporary installation for the duration of skulptur projekte

lives and works in Düsseldorf, Germany

Thomas Schütte had already used Harsewinkelplatz in 1987 as the location for his project Kirschensäule (Cherry Column). In 2007 he returned to the square with his work Modell für ein Museum (Model for a museum) – once again with an ironic commentary on changes in the city’s street furniture. This time the sculpture was not conceived specifically for the exhibition site but had already existed in varying forms since 1981.1 Over a fountain donated by the District Crafts and Trades Association Schütte placed a three-part model of a museum building whose underlying idea contrasted with its provincial, commercially-minded surroundings. The model’s glass plinth resembled a coffin for Snow White that encloses but does not conceal its contents. Schütte responded with relish to Kasper König’s remark, “Make this fountain disappear, but don’t destroy it”2, and also added light and a nearby bench for his mise-en-scène of the fountain. By placing the museum hierarchically above the fountain the artist was focusing critical attention both on the fountain’s installation and on the connotations of the museum as an institution. 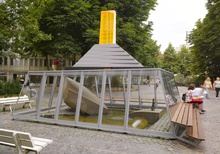