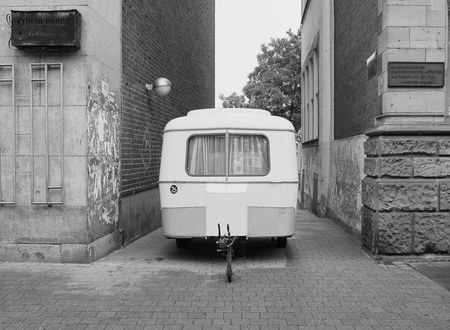 6th week: An der Kleimannbrücke no. 50

12th week: church square in Nienberge, in front of no. 6

16th week: Gerichtsstraße / west side of Hindenburgplatz, (not used due to shortened duration of exhibition)

17th week: parking space in front of Hauptbahnhof, parking meter no. 1328, (not used due to shortened duration of exhibition)

18th week: Sonnenstraße, near Ritterstraße, (not used due to shortened duration of exhibition)

19th week: in front of Germanistisches Institut, parking space under trees, (not used due to shortened duration of exhibition)

In 1977, Michael Asher participated in the exhibition Skulptur Ausstellung in Münster, organized by the Westfälisches Landesmuseum für Kunst und Kulturgeschichte. He made a work for Münster, which consisted of a rented Hymer–Eriba Familia camping trailer. Every Monday, while the museum was closed to the public, over the course of the nineteen-week exhibition the trailer was moved to another part of the city. It was therefore relocated nineteen times to nineteen different positions in and around Münster, a number intentionally corresponding to the timeframe of the exhibition.1

Asher strategically sited the caravan so it gradually radiated further away from the governing center of the exhibition – the museum, projecting the object sometimes into rural sites in a radius eventually measuring about three miles from the Landesmuseum. At each site, the trailer was parked and remained locked. Its curtains were pulled closed without any indication the object was art. The locations where Asher decided to situate the trailer were everyday spots, ranging from parallel parking spaces on the street in front of apartment buildings, offices, and shops, to light-industrial sites, parks, and the banks of a canal. As the weeks of the exhibition came to a close, the object, too, was drawn back incrementally closer to the museum. Available at the museum’s front desk, a regularly updated handout considered an essential part of the work, provided information of the whereabouts of the caravan and set museum visitors out of the institution and into the city streets of Münster to find the trailer.

This work for Münster, in fact, consists of a number of essential components. It was made up of the white caravan; the printed handout produced each week with the descriptive text, maps, nineteen locations; the documentary photographs that show the caravan’s placement within the surrounding cityscape and, of course, the viewer’s search for or happenstance stumbling upon it.2

As many readers know, the first edition of Skulptur Projekte was not originally conceived as a perennial exhibition. But, as the exhibition now approaches its fifth edition, Asher is the only artist who was invited to participate in every edition, and until his untimely death in 2012, each time his participation was exactly the same form: a rented white caravan, same make and model, moved to the same locations (when possible) and same sequence as the first exhibition in 1977. Because of the urban transformations, the caravan could not be parked in some of the original 1977 locations as documentary photographs over the years beautifully reveal. During those weeks it was garaged.

For more than thirty years and four editions of Skulptur Projekte, Asher’s work therefore took on changing levels of involvement with and relevance to the economic, social, political, and historical contexts in which it was produced and experienced. In other words, he allowed the existing realities of these contexts, variable over time as they are, to be naturally incorporated into the work, while the work as an object and a site remained constant. Although the same model of trailer was presented, each iteration of the exhibition was a new work because it was experienced against the backdrop of new and shifting social and urban infrastructures and conditions. Other more practical factors but no less integral to the work also vary: they include the exhibition dates, its duration in weeks, and the knowledge and skills of the curatorial teams, administrators, and technical staff who organize Skulptur Projekte.3

By insisting that the same text is used to describe the work and the same 1977 make and model of caravan rented, Asher subverts the requirement often placed on artists to come up with a new idea. He maintains the concept of the original, forgoing the need to conceptualize another work. Yet the work was always inherently and continually re-conceptualized. Just as he placed responsibility of building walls onto the institution in earlier works, such as that at Pomona College in 1970, he also placed physical responsibility to realize the Münster work, along with its maintenance and documentation, onto Skulptur Projekte. He required the staff to regularly hitch the caravan to a car or truck and move it each week to the predetermined locations. He literally put them to work as part of the work. Indeed, in 1977, founding co-curator Klaus Bußmann found himself hauling the trailer from place to place.4

This displacement of labor by the artist onto the institution is inherent in the caravan project, further setting it within the context of important questions related to artists’ engagement with the exhibition form and the institution and, as Asher confirms in the last sentence in his handout: “The transit from one position to the other is also part of the installation.” 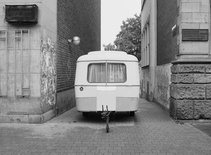